Behind the Dirt: The story of the Bijou Bike Park from First Tracks Productions on Vimeo.

Who’s involved and why?

The Bijou Bike Park started as an idea in early 2011 when we were getting TAMBA  (Tahoe Area Mountain Biking Association) back together, at the same time a group in Truckee was also proposing a bike park there so we started trading notes with them. A few of us met with City of South Lake Tahoe staff to propose the idea and were given a green light to move forward drawing up plans on a 5 acre piece of land within Bijou Park to test the idea.

Ben Fish drew up the first sketch of the bike park one night in 2011 and made a project board with a series of bullet points talking about what a bike park is and what the benefits are, this circulated around for years and was revised many times with updates to the design. Lauren and John Thomaselli were the BMX track operators at the time and we included the BMX track in the bike park plans because the existing track site was located on school land has always been temporary. We had a small group of people pushing the project forward from then on and meeting with City staff on a regular basis over the years. Garrett Villanueva lent his expertise in trails, engineering, partnerships and volunteer agreements and wrote the operations and maintenance plan for the bike park. Jason Toutolmin took over the BMX track operations shortly after in 2012 and became a supporter and involved with the BMX track design. Ben Fish is a registered landscape architect and volunteered all his time putting together presentations, design plans, permitting drawings, and cost estimates through his company, Design Workshop at a cost saving of about $100,000.

The City of South Lake Tahoe including City Staff and City Council made this idea a reality. Without the support and direction from City Manager Nancy Kerry and Jim Marino in Public Works, the Bijou Bike Park never would have been built. In the spring of 2015, the City hired Alex Fowler from Elite Trax USA to lead the construction, working along with the City’s road crew and equipment. 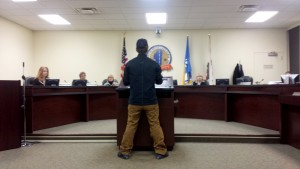 Presentations and vocal community support to South Lake Tahoe City Council showed City officials how important this project is to the community.

During construction a select group of volunteers emerged with ties to TAMBA and other areas where big jumps and features have been built (“Pig Trails” and Pinenuts). This group of skilled riders and builders have become our pro-builder volunteers and includes Cory Dicks, Matt Stuck, Kris Morehead, and Adam Leman. The Bijou Bike Park started as an idea that has since gained huge community support. We’re always looking for more people to step up and help with maintenance, fundraising, and leadership of the park.

Biggest hurdle in making this project come to fruition?

Selling the idea of a bike park, it’s really not a common use of public land like a soccer field, there’s only about 100 public bike parks in the country compared to about 30,000 skate parks and countless sports fields. The permitting process was hard too, first we had to get recommended in the Parks and Rec. Master Plan, the Parks and Rec. Commission approval, Planning Commission approval and of course TRPA approval. TAMBA has raised $15,000 over the years and we thought fundraising was going to be the hardest part, but then the City recognized the value of the project and put near $200,000 towards the construction along with staff time and city equipment for construction! We can’t thank the City of South Lake Tahoe enough.

How long did it take to build the Bijou Bike Park?

Under 3 months in total. We had a pre-construction meeting on July 6, 2015 with major earthwork starting on July 15, 2015.  The earthwork and most of the dirt shaping was complete by late August and the 20 pre-built wood features arrived on September 8, 2015.
The grand opening of the Bijou Bike Park was September 19, 2015.

How much did Bijou Bike Park cost?

In total about $200,000 was spent to build the 5 acre Bijou Bike Park. $60,000 of that went to Elite Trax, another $60,000 was spent on the pre-built wood features, about $8,000 was spent on the BMX slurry coat and the rest was spent on construction materials and equipment rentals. The majority of this money came from the City of South Lake Tahoe, as approved by City Council to fund the project, $15,000 came from TAMBA donations. All of the design and permitting of the project was donated by Design Workshop/Ben Fish at a cost savings of approximately $100,000. About 500 CY of dirt was hauled to the site free of charge by City staff. City staff also worked full time for over 2 months doing all of the major earthwork, construction oversight, utilities and more. Many services were donated from the community including the signage from Heavenly, the paver entry Plaza from Tahoe Outdoor Living. Hundreds of volunteer hours were spent shaping dirt, cutting trails and working on the project. We feel this was very cost efficient and effective process to build a world-class bike park with a true community effort and partnership with the City. 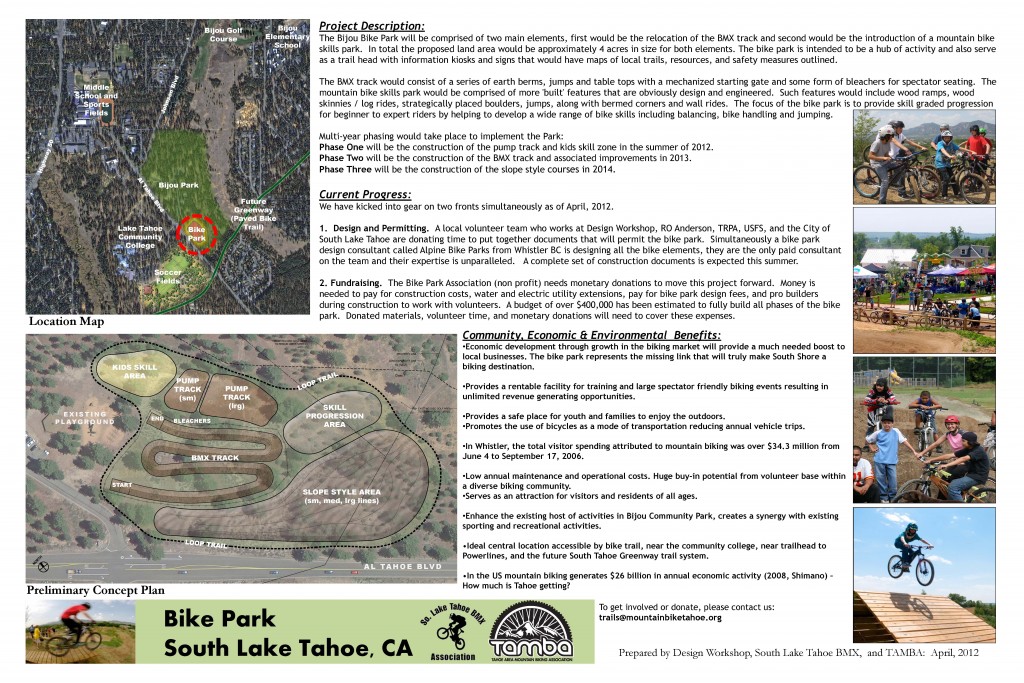 An early project board from 2012 that helped “sell” the idea.